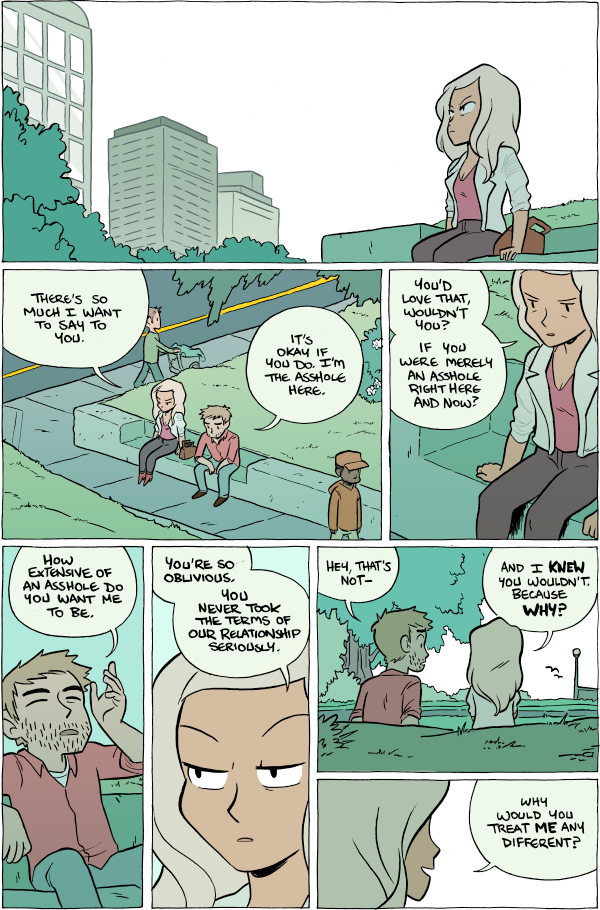 I just love the green coming through in this scene. This whole arc, painted in the colors of spring! How pleasant that it's rerunning in April.

So here's another breakup to bookend the story, a Mature break-up, a break-up between Adults who've been here before, who know the excuses and the hidden meaning behind every word. At time of writing one of my friends had dumped a girl he probably should've never been dating, and allowed her to rail on him for it, which she did for a long time and in a monstrous way.

There's a lot of debate about what you're owed in a breakup, and nobody in the first wave of comments really reached a consensus about Aimee. She never really got her own arc, she was only seen through the lens of Will's own struggles, so it seemed fitting to have her go out with a monologue that was reasoned but cruel. I don't think there was much more to be said about her; she's a pretty girl who's restless, who would like a portable version of "settled down", and Will couldn't see his place in that.

There's no argument of fairness to be made about the circumstances - that's just what they are. The only thing to debate is each party's performance in the breakup itself, a traumatic event that, whether we like it or not, becomes irrelevant over time.